The winner of the Excellence in Business Award, sponsored by Scotiabank, was Vogue Optical, recognizing excellence in all areas of their business operations. The runners-up in this category included MRSB Group and Bevan Bros. Plumbing & Heating.

Papa Joe’s Restaurant was the recipient of the Excellence in Customer Service Award, co-sponsored by BDO Canada LLP and Cox & Palmer, for showing a strong commitment to outstanding customer service, customer loyalty, community involvement and having demonstrated innovation within the sector. Finalists included Grand Senses Spa and 3rd Degree Training.

The Not-for-Profit Excellence Award, sponsored by Results Marketing & Advertising, recognizes the accomplishments of an organization in the not-for-profit sector that contributes to the economic, social and/or cultural well-being of the Greater Charlottetown Area. The recipient of this year’s award was Habitat for Humanity Prince Edward Island. Award runners-up included Prince Edward Island BioAlliance and Tourism Industry Association of Prince Edward Island (TIAPEI).

Receiving the Workplace Excellence Award, sponsored by the Royal Bank of Canada, was BioVectra Inc. This award recognizes a business that strives in providing employees with a positive, healthy and productive workplace. Finalists in this category included Invesco and RBC Dominion Securities.

The Emerging Business Excellence Award, sponsored by the City of Charlottetown, is given to a business that has demonstrated remarkable growth, innovation, and leadership in their industry sector. SableARC Studios was the winner in this category. Runners-up included Reset Breathe Fitness and Dosecann Cannabis Solution.

Decided by an online public vote, the People’s Choice for Community Impact Award, sponsored by MRSB Group, went to Reactive Health. This award recognizes a small, locally owned and operated business that has earned an engaged and loyal following and support from the community. Other finalists in this category were Friendly S.P.U.D Productions and Nine Yards Studio.

The Greater Charlottetown Area Chamber of Commerce also recognized Kim Green as the recipient of The Entrepreneur of the Year Award, sponsored by the Provincial Credit Unions and Grace McCourt was presented with the Volunteer Excellence Award, sponsored by Maritime Electric. 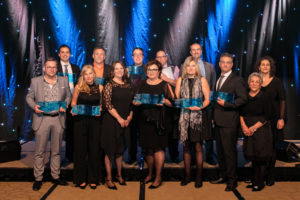